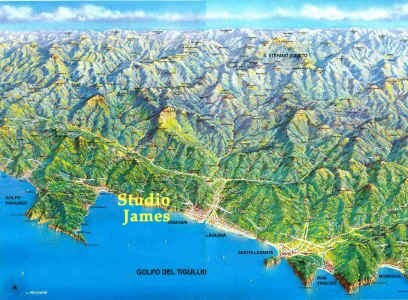 A  rainbow  of  emotions

A piece of heaven. It stretches from Portofino to Sestri Levante, whasched by the sea and surrounded by blossoming hills.

A natural oasis where man's hand has touched, surely, but without being able to master the environmental abondance of these places. Possibly he added something: culture, arts, history, traditions and folklore. A successful mixture, a cocktail of coulors and flavours, a worthwhile rainbow of emotions.

Let's try to discover together the ingredients starting from Portofino promontory  - one of the most famous Italian parks, and almost symbol of this coast strip. Strolling through the paths you penetrate a coffer full of precious stones. What colours! A kaleidoscopethe sea-bed reproposes.
It is worthwile admiring them. All you need is a diving-mask, a pair of flippers and you are ready for an unforgettable plunge. But even a boat trip offers a unique experience. Once you have had your fill of such beauty return to dry land: there are more surprises for you. Shall we travel together?

Right then, because we are arriving in Portofino with its little harbour, its famous "piazzetta" surrounded by colourful houses. The pier, the slip, the art galleries, the cafés and the restaurants. Portofino  is renowned for the fashionable appeal of its guests and for its rich Summer festivities programme able to cohabit with the secrets of the last naval carpenters and with the last skilful makers of lace, macramé and filet.

Let's take the coast road to S.Margherita  Ligure.
On the way, the bay of Paraggi merits a stop off, if only to stand a moment on its sandy beach. You won't be wasting your time. Here we are in "Santa", as the inhabitants call it and you will do likewise  after just a short visit. Savour the prawns, enjoy the promenade, the shops and the cafés in fashon, take in an evening theatre performance and visit Villa Durazzo, its more beautiful mansion.The discovery of the coast continues.

It is just a few kilometres to  Rapallo with its old castle surrounded by the sea that once had to defend the town from pirate invasions and where nowadays original art exhibitions are held. Early in July, the caste burst into flame under a ring of fireworks: it is the highest point of festivity in honour of the Holy Virgin of Montallegro whose shrine has been built on a hill bearing the same name and that can be reached by a funicular, too. From up here, there is the most breathtaking view and the walls inside the 7th century shrine still preserve many precious "ex-voto".
Would you like to travel back in time? You could by passing under the bridge that, according to a local legend, Hannibal would have used at the time of the Punic wars and which crosses the road that goes from Rapallo to the enchanting bay of S.Michele di Pagana, or would you prefer the Iron Age?
Then, in Zoagli, search for the rests of a prehistoric type fortification called "castellaro". You certainly have enough time to discover the reality of the looms from which precious silk cloth and velvet are born.It is worthwhile visit Zoagli to meander along the footpath in the cliffs from which there is a sheer drop to the sea or be enraptured with the sunset.
Let us go on to Chiavari where there is a well-stocked museum of the Risorgimento period dedicated to Garibaldi e Mazzini. It is home of the straw-chairs called "campanino" and of the most beautiful orchids, but Chiavari is also called the "town of the arcades" and it is worth see of you s by take a walk along  the shopping centre of the old "Carugio Dritto" where you can also find a very busy antique market every second month. After a stroll around the old part of the town look into the Palazzo Torriglia picture gallery and finish up relaxing on the beach. You can't be tired, yet!

There is still a lot to be seen: for examplethe thirteenth century  Basilica dei Fieschi,  in S.Salvatore di Cogorno, where the papal cross of Innocenzo IV is kept.

Thengo on to Lavagna famous for its slate-working, and its international "marina"  and for the "Torta dei Fieschi",  a festival in period costume during which tons of cake are distributed every 14th August. The beach here is vast and goes right to Cavi: a golden tongue wet by the bluest sea You have ever seen.

We have finally arrived in Sestri Levante.   It is a very special place because it is divided by a narrow strip of land rich on vegetation and has two seas one in the "Baia del Silenzio" and one the "Baia delle Favole" named so by Hans C. Andersen taken by its beauty, and to whom a prize for the best fairy story  is dedicated every year. Sestri Levante has remained faithful to its marine village origins but has also been able to promote summer tourism with swimming, shopping and art.   The Rizzi picture-gallery minds the secrets of Tiepolo, Raffaello and Rubens.

At this point having seen the coast, do not forget to go inland.
It is rough, abounding in flora and rich in history and natural beauty. The rich "door" opens from Chiavari, at the back of which five valleys extend.
The Val Graveglia where You can look for minerals
The Fontanabuona valley with Cicagna, the slate capital, and Gattorna, the toy capital.

The Sturla valley with its old Borzone Abbey, its paleolithic faces  and Borzonasca typical genoese village.

At a higher altitude, in the Val d'Aveto, we have Santo Stefano, queen of the holidays resorts, dominated by a thirteenth century ruined castle. We are in the Natural Regional Aveto Park. Going to Rezzoaglio, it is just a few kilometres to the "Lago degli Abeti" (a fir-trees pond), with its tree-trunk fossils, a real treasure of nature as is also the nature reserve Agoraie.
... and  do not forget the Petronio valley where You can see one of the oldest copper mines in Europe, that of Libiola.

And much, much more You could find by Yourself visiting Tigullio Gulf.